"Shelley's got that original blues singer's sound...her voice hearkens back to Bessie Smith and Ma Rainey and Ethel Waters."

Buy "The Currency Is Heat"

What people are saying about the Music 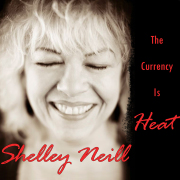 The Currency is Heat

...a quote from bestselling Japanese author Haruki Murakami printed on the inside jacket: "Music has the power to revive memoires, sometimes so intensely that they hurt." This is indeed a musical trip down memory lane...the readings are unquestionably intense. And there's a fair amount of hurtin' going on. Neill is fascinatingly chameleonic in her interpretations. Shifting from bruised to bluesy to ballsy, she ably captures the emotional heart of each tune.

Vocalist Shelley Neill reaches into the 50s era of R&B, soul and country and gives them all a dash of late night jazz on this understated yet alluring collection. The team of Laszlo Gardony/p, Ron Mahdi/b and Yoron Israel keeps the mood bluesy and casual as Neill’s earthy yet clear voice sounds sly and witty on “Old Love” and “Half Moon.” There’s a dash of Patsy Cline that brings a dash of twangful regret on her take of “Crazy” while “I Fall To Pieces” has her meld with Gardony’s thoughtful ivories to evoke more of a rueful memory than a desperate disposition. She does a cute read of “La La La Means I Love You” by turning it into a torch song, while “Hit the Road, Jack” opens with Neil humorously throwing the bum out of the house. She’s got an understated moxie that makes this a good listen, and her pick of tunes is quite astute.

Creative Music and other forms of Avant Garde

On her sixth CD as a leader, the veteran Boston jazz singer Shelley Neill continues to venture outside the standards songbook and into classic pop, blues, and R&B. So two Patsy Cline hits, “I Fall to Pieces” and the Willie Nelson-penned “Crazy,” are delivered with jazzy swing and cabaret intimacy, as is the Janis Joplin vehicle “Half Moon.” Neill’s husky alto is earthy and conversational, rather than pop-operatic. That strategy serves her well even on a doo-wop-inspired number like the Delfonics’ “La La La Means I Love You”: Where the original is playful and seductive, Neill, singing in a way-down ballad tempo, emphasizes longing and loss, the tripping syllables of the title especially wistful. Here as elsewhere, she’s served well by her longtime trio of pianist Laszlo Gardony, bassist Ron Mahdi, and drummer Yoron Israel; Gardony in particular is incisive not only in his chordal accompaniment, but also in extending the melodic line with inventive improvisations that serve the song, the arrangement, and the singer. (Out now)

And what kind of singer is Shelley Neill?  She is someone who is able to sing with a sensual voice, has the tone of a romantic and a passionate performance style. She doesn't follow the traditions of classic Jazz singing, in her technique, but rather in the emotional content of the songs - which unfold with emphasis. 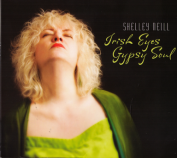 “Five years have passed since Shelley Neill completed her masterful trilogy of blues-injected jazz albums. Now Neill is back with startlingly original takes on eight familiar tunes.  Neill’s opener, “Fly Me to the Moon,” has been swung hard by Sinatra and swung soft by Diana Krall. Neill opts for an entirely fresh tack, lazily drawing out the lyric’s seductiveness to shape five minutes of scorched foreplay. Conversely, on “Fever,” Neill chooses to reduce the temperature, allowing the temptation to simmer, then cranks the heat as she segues into “Comes Love.”

Dipping into the pop-rock bag, she soothes the Motown-fueled dance-fever intensity of “Heat Wave”; revivifies Dylan’s “I Shall Be Released” by bathing it in waves of quiet contemplation; frees Barbara Lewis’ “Hello Stranger” from its bop-doo-wop roots and refits it as a slinky, bossa-influenced lure; and transforms “Dedicated to the One I Love” from a yearning teenage lament into a sweet lullaby. But most imaginative is her take on Abbey Lincoln’s “The Music Is the Magic,” with Neill as shadow-enfolded high priestess, enticing passers-by to surrender before spellbinding song.

Instead of rocking up Jazz tunes, Shelley Neill goes the other way - turning familiar Rock songs into Jazz work. The Motown classic “Heat Wave” struts to a strong Funk beat while Bob Dylan’s “I Shall Be Released” is set to a swaying Gospel rhythm, and “Hello Stranger” gets a bright Jazzy makeover, all of this is conveyed by Neill’s strong voice and Gardony’s effervescent piano playing.

Neill puts her torch singer manner to good use all over the CD, making sultry statements with “Fly Me To The Moon,” Abbey Lincoln’s “The Music Is The Magic,” and Stevie Wonder’s “Moon Blue.” Her “Fever” follows the blueprint of the Peggy Lee version but also nicely interpolates “Comes Love.”

…Neill is an overlooked singer who can really get into the heart of a song…and the rhythm section of Mahdi and Israel give her consistently good support. 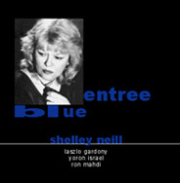 "Shelley Neill’s… release finds her more deeply engaged with the rhythm team, digging deeper into the innards of the material at hand, her forceful contralto voice as supple and expressive as ever…and always under perfect control. Her reading of Buddy Johnson’s “Fell” is full of soul music Zeitgeist. Her take on Abbey Lincoln’s “Throw” is chock full of bruised passion and defiant resignation.

“Solitude” provides a fitting climax for the brief recital, with powerful bass work from Ron Mahdi, and an impassioned performance from Neill. There’s more than a little anguish in her iteration of the line in which she confronts the idea that she’ll “soon go mad.” Her downward slurring at the end of that “mad” line is pure genius. Nobody has ever sung the song to better effect.

An exemplary disc, if even only little more

than half an hour in duration. You have to

come to grips with the balance between quality

and quantity sometime, and it may as well be 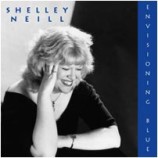 "Neill has a distinctive voice that...

can be likened to the great Bessie Smith..."

"Don’t be fooled by Shelley Neill’s conservative Bostonian roots or her Melanie Griffith blondeness. Beneath those sunny curls is a head for the blues and a torch-singer sensibility. Envisioned as a companion piece to Neill’s estimable The Blues Runs Through It, the new Envisioning Blue serves up saucily revitalized treatments of… “Am I Blue,” “It Was Written in the Stars,” “Me and the Blues” and “Now’s the Time.” …her kickass “Don’t Explain,” swapping out Billie Holiday’s victimized sorrowfulness for strident dignity… And if you thought Etta James was the only one who could quicken your pulse with a scorching “At Last,” get set for a version so vigorous it could steam up the windows of Beacon Hill’s frostiest mansions."

"Her four-year journey to explore the impact of blues on jazz culminates with this year’s release. Shelley Neill unites the same band that aided her quite successfully in her previous study of the blues in jazz.

Neill wears the blues well. Her portrayal of sensual ballads, such as “At Last” and “Don’t Explain,” generate deep feeling. “Am I Blue” features Laszlo Gardony as her conversational, keyboard partner. Together they pour out the sorrow that we associate with being blue. Why sing about depression? Because songs such as “Empty Bed Blues” and “Me and the Blues” cause us to step back to take a look at our situation. By looking at ourselves from afar, we’re able to defeat those blues and pull ourselves out of it.

Neill is an acquired taste…her husky voice reminds me of the adventurous aspect of Jay Clayton and the drama of Morgana King. The musicians on board here are quite good. Violinist John Blake did a fair amount of cutting-edge fusion… and Laszlo Gardony’s piano work

The ten tracks are well chosen from The Great American Songbook mixed with Blues and R & B tunes. On “I’ll Close My Eyes,” “Am I Blue” or the “Empty Bed Blues,” Blake lends strong support with either violin solos or providing counterpoint to Neill’s vocals. “Something’s Gotta Give” another R&B staple …evokes soulfulness.

Jazz history is full of blues vocalists who sing jazz and vice versa. I think we’ll see Neill… in the future.

All About Jazz Magazine 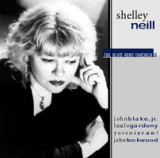 The Blues Runs Through It

"Shelley Neill continues to explore the links between blues and vocal jazz with a list of songs that runs the calendar gamut from 1923 to the modern day. Backed by a quartet of Laszlo Gardony on piano, John Lockwood on bass, Yoron Israel on drums, and John Blake Jr. on violin, Neill applies her powerful, expressive style to songs that may not be strictly blues tunes, but which have a blues feel to them. Moreover, Neill's vocal style has a built-in empathy for yearning in it, giving everything she sings a sort of blues/R&B inflection, making the interpretations uniquely her own...The Billie Holiday classic "Strange Fruit" is given an avant-garde jazz introduction led by the heavy tremolo of Gardony's piano and the eerily pitched strings of Blake's violin. The intro consumes more than six and a half minutes of the ten and three-quarters minutes allotted for the tune, before Neill floats in singing in French before the rest of the accompaniment resumes. Different, to say the least. Blake's violin, when matched with the cry in Neill's rendering of "It Was Written in the Stars," makes it a first-rate cut. With each release, Neill has grown to a point where she is becoming a major interpreter of the American Songbook. " 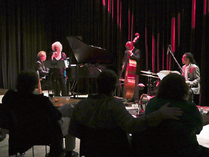 “Solitude” provides a fitting climax for the brief recital, with powerful bass work from Ron Mahdi, and an impassioned performance from Neill. There’s more than a little anguish in her iteration of the line in which she confronts the idea that she’ll “soon go mad.” Her downward slurring at the end of that “mad” line is pure genius. Nobody has ever sung the song to better effect.

An exemplary disc, if even only little more

than half an hour in duration. You have to

come to grips with the balance between quality

and quantity sometime, and it may as well be